In the agricultural society of Taiwan in the old days, the needs of farm implements, knives, and hardware were immense. Whenever there was a need from the residents in Daxi and Fuxing, they would come to "Blacksmith Street" at Jungyang Road of Daxi Township. In the duration from the Japanese colonial period to the 1960s, there were over a dozen blacksmith shops at its peak. Now, owing to the shrinking market, only two remains. The century-old "Huanghululai Iron Shop" is run by the 3rd generation today. The pure fire that forges handcrafted blades from the furnace still shines with the spirit of blacksmith.

"Huanghululai Iron Shop" was founded by Huang, Ku in 1916, and is passed down to the son, Huang, Chuan-Wang. The agriculture and forestry transformations in the 1960s impacted the blacksmith industry. The furnaces in Zhongli almost died out, and there are only two to three shops surviving in Daxi, including Huang, Chuan-Wang's. It is perhaps out of a tenacity forged with iron and fire for a century.

The Iron Shop is now passed down to the 3rd son, Huang, Mao-Nien. He hopes that the customers to Huanghululai Iron Shop, among the handcrafted hardware, can feel not only the rigid craftsmanship, but the human touch and warmth in the old days. 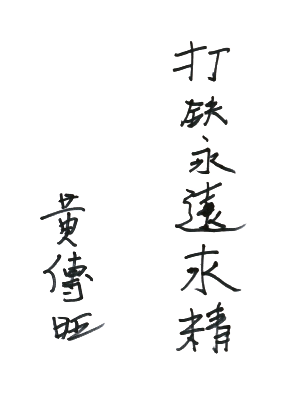