The Bittersweet Life of Top King

The literature regarding Top can be traced back to Song Dynasty of China. According to the information from Meihua Top Museum at Daxi, a Top is called "Kan Lok" in Minnan Language. The traditional shape of a Top is close to an inverted bell (or an inverted cone), made of wood or iron. A modern Top today comes in various shapes and materials.

Yang, Chin-Lu lived in the mountains in his childhood, when his father made Tops for him to play. It was also the moment when his fate was tied to Top. It was even to Yang's surprise that he becomes the only Top maker in Daxi later on. Around 1979, Fu Ren Temple of Daxi began to throw Top Festival. It was not until 1981 that Yang began to participate in the contest. Nevertheless, he failed to pick up the trick to play huge Top at the time. Later, he figured out the mean to use the rope, and successfully created a huge Top weighed 73.2 kg in 1983. In the same year, Yang, Chin-Lu performed on the Double Tenth Day (the National Day) at the Top Festival in front of the Office of President. Ever since then, he started to promote Top-playing techniques in schools in various levels.

To date, Yang, Chin-Lu at the age of 80 can still play Top weighed 48 kg at ease. Hearing that media at home and abroad coming to cover his story, Yang laughed and said "I don't know why they're interviewing me, either. All I know is that I feel happy playing Top." 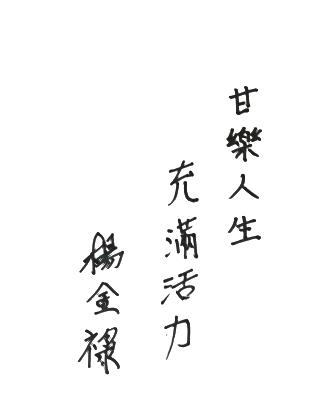