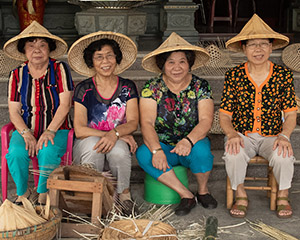 The Beautiful Realm of Tou Li at Kengzi

Tou Li (bamboo hat) enjoys a long history. One can find its trace in "XiaoYa" of Shijing ("Lesser Court Hymns" of Classic of Poetry): You've come here for grazing, wearing bamboo raincoat and bamboo hat. In the early days of Taiwan, Tou Lis was the most splendid skyline one could see in the countryside. Apart from being the common hat seen around villages, it has become a symbol with meanings as well. Some may celebrate it as "the crown of commoner". To the residents in Kengzih of Luzhu Village, Tou Li is the memory shared among themselves throughout their lives.
Prior to the 1980s, the scene of weaving Tou Li was a picture frequently seen at Kengzih. Therefore, Kengzih is also known as the Beautiful Realm of Tou Li. Based on the methods and materials employed, Tou Li can be divided as rugged one and delicate counterpart. The Chin's and Chen's of Tudigongkeng excel at producing rugged Tou Li, while Lee's of Chihtuci specializes in making delicate Tou Li. There were around 30 households handcrafting Tou Li at its pinnacle, producing over one hundred Tou Li per day for the tea farmers and brick factory workers in the neighborhood.

Now that the brick kiln at Linkou closed down one after another and that the number of tea farms in vicinity has shrunk, only 5 or 6 masters remain today. To pass down the culture of forefathers, Kengzih Community Development Association, joint forces with other intellectuals, compiled the materials of Tou Li making, inviting senior masters to open courses. Promotional events and classes of traditional bamboo arts are organized as well to shed light on the revival of Tou Li. 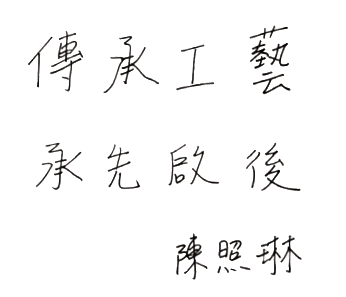